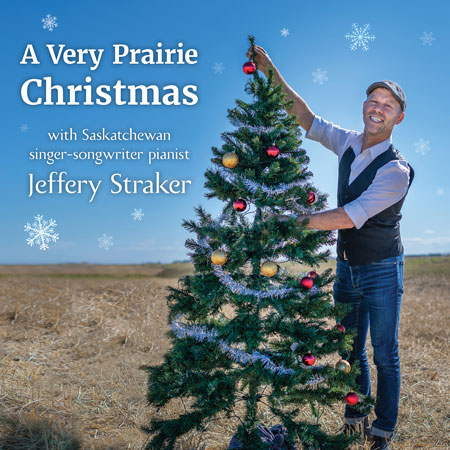 A holiday-themed evening with Saskatchewan’s own award-winning singer-songwriter pianist Jeffery Straker.  Bring a friend, wear an 'ugly' Christmas sweater, and get into the festive spirit.  Classic and contemporary Christmas songs, story-telling and maybe even an audience sing-along (pending Covid-restrictions).  3 years running at the Casino Regina Show Lounge – & back by popular demand.

Jeffery Straker grew up taking piano lessons in small-town Saskatchewan and has gone on to perform over 100 shows per year across Canada, Europe and Latin America. The storytelling nature of his roots-folk songs has the power to transport a listener - out onto a lake in Canada’s North or to the main street of a prairie town.  Critical comparisons have been drawn to the likes of Harry Chapin, Kris Kristofferson, & Billy Joel while performances have seen him live on BBC radio in the UK, on stage with symphony orchestras and in backyards on his recent summer tour.  “He has a way of drawing us into his world and making us feel like we’re a welcome guest; an old friend he’s ready to catch up with” (CBC Saskatchewan Weekend).

Saskatchewan locals may recognize him as a host and performer on ‘Telemiracle’, and his songs have also been used in TV, film and theatrical productions.  Named “Roots-Folk Artist of the Year” in the 2020 Saskatchewan Music Awards, he was also named ‘Keyboard Player of the Year’ in the 2020 Saskatchewan Country Music Awards.  He released a new 10-song recording “Just Before Sunrise” in May 2021 and promoted it performing 55 concerts in his summer-long “Pandemic Piano Backyard Tour”. Critics have said:

“Direct, honest and sure-handed, there's a magic to Straker's folk-based piano styling and powerful storytelling…a brand of contagion well worth catching”  (The Walleye)