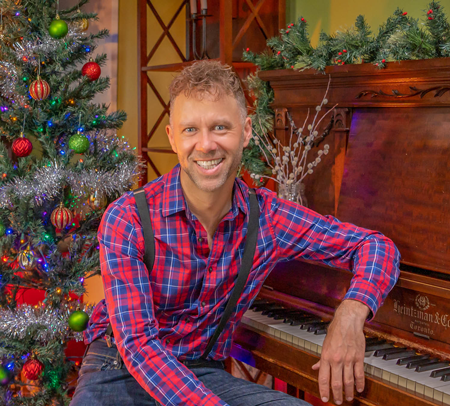 A holiday-themed evening with Saskatchewan’s own award winning singer-songwriter-pianist Jeffery Straker, and some of his musical friends.  Bring a friend, wear an 'ugly' Christmas sweater, and get into the festive spirit.  Classic and contemporary Christmas songs, story-telling and maybe even an audience sing-along.  Sold-out 2 years running.  Get your tickets early and get ready to get festive.

"Some of my favourite memories of Christmas times growing up were having people around the piano, singing carols late into the evening with a glass or 3 of ‘cheer’.  I hope to bring a bit of that musical Christmas magic to the stage with this concert".  Join us!  JS

Jeffery Straker tours over 100 shows across Canada, Europe and Latin America each year.  He's recorded for CBC Radio's Canada Live, had a music video in the top 10 in Canada, and has had his music used in TV, movies and theatrical productions.  His tour stops range from intimate house concerts to club & theatre shows and include recent sold-out performances with symphony orchestras.  Critical comparisons have been made to the likes of Kris Kristofferson, Billy Joel, & Harry Chapin while The Chicago Free Press has written:

“Rufus Wainwright, as well as k.d. lang are among the Canadians making essential and beautiful music. Add the name Jeffery Straker to that list”.

His latest album "Dirt Road Confessional" (May 2017) debuted at #5 on the iTunes Canada singer-songwriter charts, and received airplay on both CBC radio 1 and 2 across the country.  Jeffery recently debuted at Canada’s National Arts Centre in Ottawa, and also performed in concert across the Netherlands.  He received a nomination for a Western Canadian Music Award in 2019.  www.jeffstraker.com