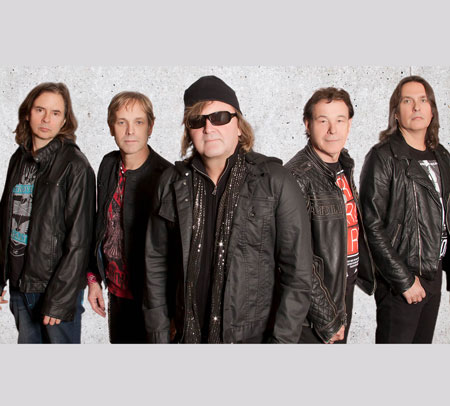 The band was originally formed in 1981 by lead vocalist and guitarist Johnnie Dee from Niagara Falls, Ontario. Following the departure of the original lead guitarist, Derry Grehan, also from the Niagara Falls area, joined the band. Johnnie and Derry decided to re-build the band at that point and recruited Dave Betts on drums, Ray Coburn on keys, and Gary Lalonde on bass. They hit the road hard playing 6 nights a week and writing songs with the hope of scoring a record deal. In 1983, the band entered a demo of "New Girl Now" to a Homegrown Contest put on by Toronto rock station Q107. They won that year and this led to a multi album deal with WEA Canada after being signed by Bob Roper. The band recorded their debut self titled album which was released in July, 1984. The album was an instant success, and with the help of massive airplay, several videos on MTV and MuchMusic, it went on to sell over 300,000 units in Canada alone. Since their debut release, Honeymoon Suite has released a total of 7 studio albums with over 1 million units sold worldwide driven by the success of a string of hit singles such as "New Girl Now", Burning In Love", "Wave Babies", "Stay In the Light","Feel It Again" and "What Does It Take", to name a few.
With no sign of slowing down, Honeymoon Suite continues create new music and tour year round thanks to a legion of loyal fans.