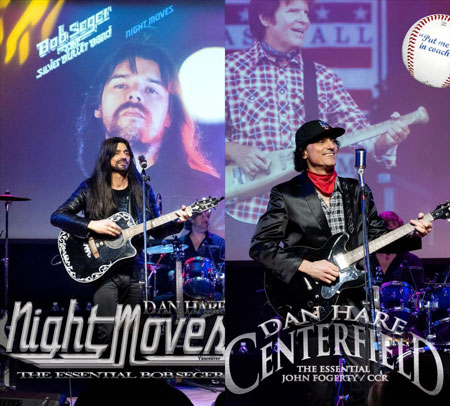 Bob Seger is an American music legend second to none with countless hits loved by millions everywhere! With the powerful vocals required for this show, Night Moves starring Dan Hare re-creates Bob Seger of the 70s and 80s when his hits were on every rock radio station in the world. Night Moves, starring Dan Hare is the ultimate tribute to the music of Bob Seger! The Look, the Voice, the Hits.

As John Fogerty says in his hit Creedence Song, “You can’t go wrong if you play a little bit of that Creedence Song” Everyone agrees! Centerfield, starring Dan Hare is the ultimate tribute to the music of John Fogerty and CCR! Re-live the memories of one of the most loved rock music icons of all time as Centerfield authentically re-creates the CCR classics along with the best of Fogerty’s later hits.