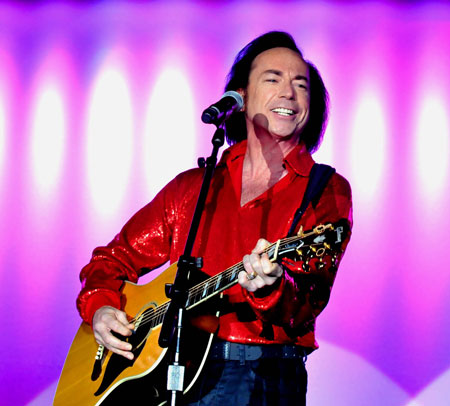 A legend and pioneer in the Canadian tribute community, Bobby Bruce's Nearly Neil journey began in 1994. An actor and singer from Vancouver, Bruce was a new transplant into the Toronto entertainment scene when he was convinced by an Elvis impersonator to join a local multi-tribute show. Within a year Bruce was being scouted by Las Vegas' Legends in Concert. He joined them for a 10-month engagement in the US with appearances stretching from Nevada to Branson to Atlantic City.

International engagements came calling, Bruce's first national tour of Australia with another Legends-style show saw 60 shows in 10 weeks across the continent, earning him his moniker.

Over twenty-five years into his Nearly Neil journey, Bruce, now 52, lives with his wife, Leanne, off the coast of Vancouver, BC on Gambier Island in the Howe Sound. When European and Australian tours were suddenly out of the question in early 2020, they adapted to life off-the-road by starting a volunteer essential goods delivery service to ensure food security to their community during the lockdown. The were both awarded Gambier Island Citizen of the Year for their efforts.

Now with live opportunities returning The Solitary Band is revved up and ready to return to the stage.