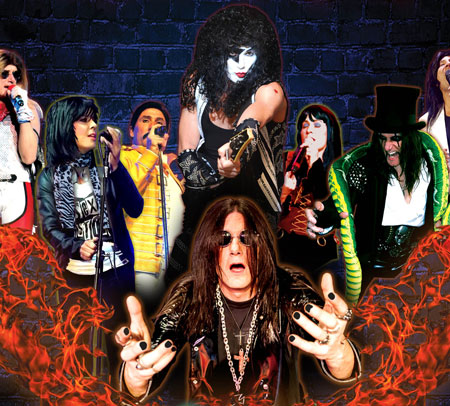 It’s the classic rock music you love … and you can’t get enough of it. Are these rock icons the real thing or is this Snake Oil?

This is not a tribute band! Snake Oil's musical cast not only look like the rock stars they portray, but they use their own natural voices to perfectly impersonate the singing and speaking voices and stage mannerisms of these rock icons. Snake Oil's performances are known for their impeccable authenticity to the original artists' recordings, with spectacular costumes, hilarious audience interaction and an array of incredible special effects, including video support. Snake Oil has an outstanding cast of world-class accomplished musical artists, talented singers, and technical support to ensure an authentic 80's arena-style rock show experience.

Warp back to a time with the lost art and attitude of real 80's rock. The kind of costumed and propped rock show that filled and shook the arenas and stadiums of the world; The Hair Rock, Melodic Rock, and Classic Rock you love, fuelled with energy, fun and sprinkled in humor, these guys are good, real good.

The rock icons portrayed on center stage are supported by Snake Oil's stage performers who are also in character. The spirit of the rock n' roll party and everything that goes along with it. The audience is guaranteed a good time!