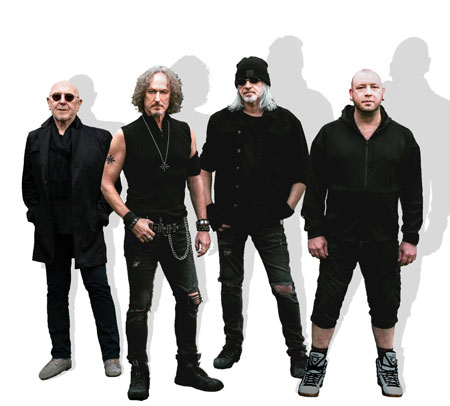 There were the pioneers who took Scottish Rock international and paved the way for the many other great Scottish bands that came later… The likes of Big Country, Simple Minds, etc.

From 1971 till now, Nazareth have recorded 23 studio albums, earning them platinum, gold and silver awards throughout the world with 3 platinum and 8 gold albums coming from Canada alone.

Their latest release, Rock’n’Roll Telephone (2014) was described by one music press critic simply as “one more masterpiece” so we’ll just leave it at that.

The lineup today consists of Jimmy Murrison, Lee Agnew, Pete Agnew and new singer Carl Sentence who joined the band in 2015 after Dan McCafferty had to retire due to ill health.

Reviewing one of the first shows with Carl performing as lead singer, a member of the Rock press confirmed what the band members already agreed, that: “He fits right in as a man on a mission to prove his worth and totally nails it. He has mastery of the material and wears the songs like an old leather jacket”.